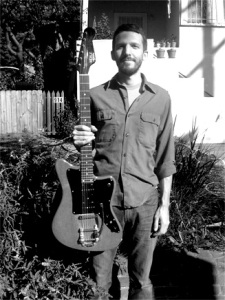 Trevor Healy is a guitarist, repairman and luthier based in the San Francisco Bay area. In addition to playing in the group Meridians, Trevor composes for solo acoustic guitar, and was tapped by Sean Smith for the new Beyond Berkeley Guitar collection, out now on Tompkins Square. We recently talked to Trevor about his appearance on the comp, as well as his approach to building and playing the guitar.

W&W: Please describe the guitar you play on your track, how long you’ve owned it, where you got it.

The guitar is a Stella 12-string, made by Harmony sometime in the 1960’s. I got it on EBay about 6 years ago after becoming interested in Leadbelly’s 12-string playing. When the box arrived, I realized that the guitar had not been taken out of its case since the 60’s, but needed a ton of work to make it a playable instrument. Like many Harmony guitars, its body is made of plywood and the neck is poplar, which some consider low-grade materials. It’s light weight and darker tone spoke to me though, and I thought it had some real potential to become a decent instrument. So, I re-set the neck for proper bridge and action height, made a new bridge and saddle, radiused the previously flat fingerboard and re-fretted it. Acoustically it is pretty quiet and has an almost lute-like tone. I have come to love this quality. I then put in an under-saddle piezo pickup to amplify the sound in live situations. When I first plugged in the guitar, I was blown away by its tone. I have played it almost exclusively since then. END_OF_DOCUMENT_TOKEN_TO_BE_REPLACED