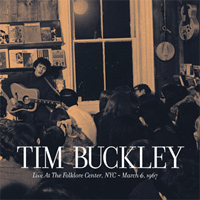 I first discovered Tim Buckley about ten years ago, when a band-mate played me the sublime Happy Sad album. It was something of a revelation, on par with The Zombies’ Odessey and Oracle, The Beach Boys’ Pet Sounds or Love’s Forever Changes… each of these records was able to penetrate my mistrust for classic rock and hippie-dippy affectations by offering up innovative production, unusual blends of acoustic and electric instruments, and acute musicality. Happy Sad had a vibe all its own, with David Friedman’s atmospheric washes of vibraphone and guitarist Lee Underwood’s jazzy, wandering leads… and then there was the singer, with his elastic, transcendent voice… I hadn’t heard anything like it before. I was hooked, and still remember making a point of telling everyone I knew about Tim Buckley. “Now that’s a singer!”

I was very excited when I found out that a new Buckley live document was in the offing, since his Dream Letter : Live In London 1968, Peel Sessions and subsequent Once I Was discs have always remained rewarding listens. Many fans prefer live Tim Buckley to the comparably inconsistent studio albums, including Tompkins Square label head Josh Rosenthal… and I knew that if Rosenthal was involved, Live At The Folklore Center – March 6, 1967 must be a significant recording. The story of how he came into the master tape is a fascinating one, and is recounted in detail in this Onion AV Club interview from a few weeks back. Tompkins Square is known for delivering impressive bang for the buck, and this package features rare archival photos and an unreleased interview with the singer. At 55 minutes, and featuring 6 never-released Buckley compositions, this important addition to his discography should be an easy sell for even casual fans.

…and an important recording it is. Live At The Folklore Center… captures a young Tim Buckley performing to a captive audience in an almost unbelievably intimate setting, the Folklore Center at 321 Sixth Ave in New York City. Attendance was between 30 and 40 people, and the recording was undertaken by Izzy Young, a dedicated NYC folk music enthusiast. The fidelity here is remarkably good, and though the “mix” is a little boomy guitar-wise, this proves a minor quibble. Everything about Tim Buckley, still in the formative stages of his short career, comes through loud and clear… including the fragile person behind the otherworldly voice.

Aside from the previously unreleased compositions, the songs are culled almost exclusively from Buckley’s first two studio albums, the date of the performance falling between the release of his self-titled debut and the recording of his second, Goodbye and Hello. The tracks that appeared on Tim Buckley tend to fare very well in the man-and-his-guitar context… From the outset, the setting appears casual enough, and Buckley nervously wonders whether the tape recorder will pick up his singing. Though this shy, nervous Buckley will reappear in stage banter throughout the set, he all but disappears in the opening chords of “Song For Janie”. With energetic strumming and sufficient guitar flourishes, the tune holds up well in this stripped-down setting.

Tim Buckley – “Song For Janie”
.
In “I Can’t See You”, Buckley wrestles with his guitar falling out of tune, but the song easily rises above some of Buckley’s other Elektra-era folk-pop by using an interesting verse structure and a dissonant, wordless chorus. “Aren’t You The Girl” has some of the most effective guitar accompaniment of the night, and even though the chord choices don’t vary greatly from the other songs, Buckley keeps it interesting by peppering his uptempo strumming with quick arpeggios and decending bass figures.

“Wings”, though, is unable to improve on the album version. The strumming feels heavy-handed, even when Buckley (briefly) attempts to soften the song’s dynamic toward the end of the track. The album’s string arrangement, saccharin as it was, had a way of nicely filling the spaces between the verses. The faster tempo of this version feels somewhat rushed.

The set performed on Live At The Folklore Center… isn’t perfectly paced or executed, far from it… the setlist is a long one, and there isn’t much variety in approach, technique or lyrical content on Buckley’s part. The songs that would soon appear on sophomore album Goodbye & Hello sound a little hollow here, bereft of their studio treatments. One gets the feeling that these were written in/for the studio, where the band and producers could run wild with the bubblegum-psych production embellishments that were coming into vogue at the time.  In several cases, the lack of ear-candy lays bare the relatively flowery and ambiguous nature of Buckley’s lyrics. “Troubadour” features more than a few psych-pop clichés… “No Man Can Find The War” sits as awkwardly in this set as it does as the opener of Goodbye…, as Buckley, with no comment or introduction, waxes political on just one song of this sixteen song set. The lyrics fall all over themselves trying to paint a picture of the wartime conditions in the Vietnam jungle, and though I don’t miss the indulgent production of the studio version, this reading doesn’t really approach its ominous mood, keeping the song from resonating. “Phantasmagoria in Two” sounds like Buckley’s attempt at Tim Hardin’s “If I Was A Carpenter”, but lacks that song’s directness. It’s consistent with his writing from this period, the lyrical ambiguity making it hard to understand what Buckley is truely trying to say. That said, I do prefer this version to the studio take, which suffers from some unusually irritating noodling from Lee Underwood. 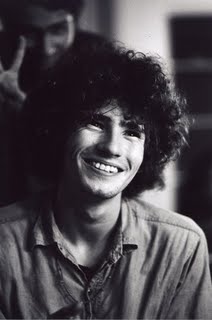 Two tracks from Goodbye… do work very well in this setting, equally important, but for much different reasons. In “I Never Asked To Be Your Mountain”, Buckley’s singing achieves a sublime balance of the personal and poetic. It’s a wonderful example of his vocal gift, the performance energetic and dynamic, Buckley’s excellent diction cutting perfectly through his almost violent guitar bashing… and I’ll always remember first hearing this version of “Carnival Song”, notable for the singer’s cracking voice at the end of the first verse, the only such mistake I’ve ever heard on a Tim Buckley recording. It is an amazing thing, and along with the occasionally out of tune guitar and Buckley’s aforementioned nervous demeanor throughout the set, shows the human side to Buckley’s usually larger-than-life voice and persona.

The unreleased tracks aren’t exactly lost classics, basically evoking the same moods and images as the other songs of the period. “What Do You Do (He Never Saw You)” closely echoes the vibe of “Phantasmagoria…” and features some very tender and beautiful singing, some of the most dynamic in the set. “Just Please Leave Me” has Buckley going for a heavy uptempo blues, but sounds a little more like The Monkees, while the similarly titled “I Can’t Leave You Loving Me” offers a preview of some of Buckley’s future bombastic jazz vocalizations, featuring a toned down version of the trademark falsetto-screams of his Starsailor and Lorca albums. “Country Boy” is also indicative of future artistic directions, showcasing the bluesy turns of Buckley’s late “Honeyman” (or as Wikipedia so elegantly puts it “Sex/Funk”) period. This album’s reading of the Fred Neil classic “Dolphins” not only falls far short of the sonic perfection to be found in Neil’s original, it also pales in comparison to Buckley’s later, full-band recordings of the tune.

Though it is almost impossible for this longtime fan to analyze Live At The Folklore Center, NYC… without regard to Buckley’s studio output, it is equally impossible to deny the sheer power of his voice in just about any context, and the near-naked presentation of the material on this album makes it a fascinating document. This record has given me a renewed appreciation for Buckley’s precise articulation, near-perfect vibrato, and ability to imbue his (and songwriting partner Larry Beckett’s) occasionally banal lyrics with sometimes subtle, sometimes explosive emotional energy. I would highly recommend this CD for fans of the L.A. and NYC-based folk music of the mid-60’s, and consider it an absolute must for Tim Buckley fans, especially those enamored of his early stylistic periods.

Jagtime Millionaire gigs are on hold, just like everyone else, so I think I’m going to upload all the official vids to IGTV this week, and maybe I’ll make another in social isolation. Probably a livestream to benefit @rhizome_dc at some point in the next couple weeks, thanks @jonrcamp
When does beer stop being beer? I dunno, 8% earlier than this?! Wish me luck! @eviltwinbrewingnyc #imperialipa #crazyipa
Lockdown imminent due to government order. I’ll miss you, beautiful guitar store!!! @acousticmusicworks #acoustic #guitar #covidfeels #workfromhomehow #acousticmoments
Go to the lesson page at acoustic guitar.com to see darned near an hour of RGD instruction from my man Ernie!
Hey all, get at me I’ll if you’d like to sit 6 feet away from me while I record you doing instrument demos. Got lots of fellas responding (thanks!) but would love some non-dude participants as well. Acoustic, electric, banjo, mandolin. @acousticmusicworks #acoustic #guitardemos #littlegig #gigrelief
Scary times, but we are all very thankful and hopeful to be safe and well. Rosie turned 6 today and received a fascinating self-balancing bird from Grandma! @justaminette @blanchandrews @vacc139