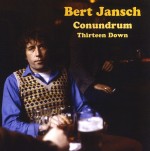 This month, Stefan Grossman’s Guitar Workshop reissues two albums from the Kicking Mule Records catalog: Happy Traum’s American Stranger (1977) and The Bert Jansch Conundrum’s Thirteen Down (1979).  Happy Traum and Bert Jansch are each singer-guitarists who launched careers during the sixties folk revival in the States and Britain, respectively.  American Stranger and Thirteen Down provide glimpses of their work in the late seventies, an era when many folk singers were trying their luck at the introspective and potentially lucrative singer-songwriter market.  Both men share a sophisticated approach to the guitar that, for each, distinguishes a repertoire of songs.  Presumably, this is why both ended up releasing at least one record with Kicking Mule (a label specialized in guitar music), and also why I’ve opted to write about the reissues together.

“The sign of a truly great guitar player is not how complex he can play but, rather, that the sounds he produces are music… the forte of Happy Traum is that he can take a blues and arrange it in a rather simple fashion to produce a very lyrical and moving and very musical performance.”