I sat down over tea with composer and multi-instrumentalist, Mike Tamburo, near his home in the Highland Park neighborhood of Pittsburgh.  We talked at length about the arc of his musical career from the middle half of last decade to present.  Mike will be on tour starting in July, supporting his latest recording as Brother Ong, Mysteries of the Shahi Baaja Volumes 1 & 2.

W&W: It seems like whenever I’m out performing there will inevitably be someone who, after finding out I’m from Pittsburgh, asks: “How’s Mike Tamburo?  Make sure you tell him that I said hello.”

W&W: The community that’s loosely formed around guitar music tends to be a small world.  You’ve obviously made your way around it and left a positive impression.  Can you reminisce for a bit about the years when you were touring extensively: where all did you go and who were some of your touring companions?

First of all, tell them all that I’m fine. (laughs again)  In 2005, I decided that I wanted to permanently stay on tour.  I’d just been through a traumatic shift in my life… honestly, at that time music was the only thing that I had.  I didn’t really know where to start.   A lot of people were connecting for the first time through the internet.  So I started reaching out to people that way, booking shows during the three week period before I left.  Nick Schillace found me and suggested we go out on tour together.  I listened to his music, which was incredible, and said “let’s give it a try.”  Other than talking to him on the phone I didn’t know anything about him or his life…

W&W: It’s a quick way to get to know someone!

(laughs) … definitely, and we were headed through a part of the country that’s a little bit harder to tour in, making our way from Detroit to Seattle.  I remember South Dakota was very difficult.   We ended up playing at a Christian Bookstore and I accidentally offended the promoter.  It’s one of the memories that is sure to keep Nick and I close (laughs again)… we endured the “red” states together, and parts of the country that neither of us had any experience with.  We had beautiful shows in Iowa City, Nebraska, Minneapolis (where I met Paul Metzger) and Seattle.  By the end of it, Nick had become one of my closest friends.  His older songs feel like the soundtrack to my life during that time. END_OF_DOCUMENT_TOKEN_TO_BE_REPLACED

The Fantastic Voyagers Festival has become one of my favorite Pittsburgh traditions these last few years. Certified-fantastic organizer Mike Tamburo has now curated three installments of the fest, and each has been a unique experience, always musically expansive and diverse. Though Tamburo has been staying close to home and concentrating on hammer dulcimer compositions for the last couple of years, he has toured extensively for the better part of a decade, and he’s forged enduring friendships with musicians from all over the country. When Mike sent me the early lineup for this years installment, having moved the proceedings to Jeffrey Alexander’s intimate Morning Glory Coffeehouse and declaring it a “return to the quiet”, I knew that it was going to be a great time, and that I would have to make every attempt to document the event for W&W. END_OF_DOCUMENT_TOKEN_TO_BE_REPLACED

Though a couple of acts are still being confirmed, Pittsburgh’s Mike Tamburo has announced the lineup for the third installment of his Fantastic Voyagers Festival, to be held this year at Morning Glory Coffeehouse on March 6 and 7. The musicians represent several styles, genres and techniques, and this years fest will see its participants exploring the quieter side of their repertoires.

The confirmed list (not necessarily in order of appearance) : 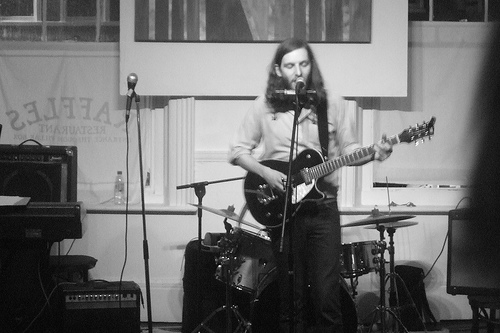 Scottish guitarist Ben Reynolds is getting ready to embark on a quick US tour. We reviewed his Tompkins Square debut How Day Earnt Its Night not too long ago, and have since been spinning his Strange Attractors album Two Wings, which is equally good! We’re going to try to take some video at the Pittsburgh performance, so keep an eye out for that… and visit Reynolds’ Myspace page for updates on the TBA dates.

Ben Reynolds is a member of the Scottish folk-rock band Trembling Bells, who are currently making a name for themselves on the European circuit. They’ve recently appeared at the yearly Green Man Festival, have a new record out on Honest Jon’s, and every press bit that I’ve seen has made mention of legendary producer Joe Boyd’s affection for the group. Not too shabby!

Mr. Reynolds busies himself with a great many projects, and has amassed a deep discography of noise and improvised recordings on such labels as Last Visible Dog, Strange Attractors Audio House, Beyond Repair, Dancing Wayang and others. The venerable Tompkins Square label tapped him for the third installment in their indispensable Imaginational Anthem compilation series, and this summer the label quietly released How Day Earnt Its Night, an instrumental acoustic guitar record and Reynold’s highest-profile solo outing to date.

Upon listening to the album and digging deeper into his back catalog, it’s clear that Reynolds has many interests, and that being associated with a a single style isn’t one of them. Thus, there is a little of everything on How Day Earnt Its Night… and though the recording quality is warm and clear, and Reynolds is a more than competent picker, there is a certain lack of direction that keeps many of these tracks from being home runs.

The songs generally fall into two categories : shorter, British Isles-flavored vignettes and extended Takoma-inspired explorations. Opener “Skylark (Scorner of the Ground)” takes the former approach, as Reynolds easily picks through some pleasant, stately figures. Though nothing revolutionary, the songs in this style are some of the best on the album, even if tracks like “Risen” and “England” rely more on the moods that they evoke than on any concrete melodic ideas. Reynolds builds most of these British-style songs around a simple alternating-bass with hammer-on riffs in the high strings, generally falling back on picking patterns and ignoring the harmonic possibilities in the chords’ middle voices. “Kirstie”, as lovely as it is, repeats the formula one last time, feeling a little like a song waiting for a singer.

Ben Reynolds – “Kirstie”
.
Most of the remaining tracks move in a decidedly more American (Primitive) direction, and the results are, sadly, a little underwhelming. “Death Sings” is bargain-basement Takoma, borrowing liberally from the vocabulary of John Fahey but adding nothing new to the conversation. “The Virgin Knows” is an over-long bottleneck dirge, piling on almost nine minutes of hammer-ons and meandering slide riffs, but never really going anywhere. Reynolds tries to channel Lightnin’ Hopkins on “All Gone Wrong Blues”, but the tune’s recycled blues runs and ever-present harmonica make for a pretty tedious listen.

The wild card on this collection is definitely the title track. “How Day Earnt Its Night” is the album’s centerpiece, sitting somewhat conspicuously between two of the aforementioned British-style tunes. “How Day…” opens with haunting three finger triplet-rolls on the high string, filling in over the course of the next few minutes with stark harmonics and staccato melodic fragments. The results are really pretty enchanting, reminding me of the hammer-dulcimer compositions of one of Reynolds’ soon-to-be-tourmates, Pittsburgh’s Mike Tamburo. Reynolds drops in some downtuned bass-note melodies, coloring the piece harmonically and adding more tension, before the still-blazing triplets are unceremoniously cut off around the eight-minute mark. The breakneck pace slows, and Reynolds noodles somewhat aimlessly for the remainder of the song… a disappointing anticlimax to what began as a very engaging and promising piece.

Ben Reynolds – “How Day Earnt Its Night” (excerpt)
.
I’ve got a few discs from Reynolds’ back catalog on their way, and am looking forward to seeing him live this autumn. While How The Day Earnt Its Night lacks originality, it does present Reynolds as a restless and intriguing picker, with both solid technique and an internalized knowledge of a few beloved acoustic guitar styles… and because Reynolds stands to grow exponentially as both a player and a composer, I plan to follow his progress closely.

Squirtbox and Thumper. Lethal combo. #kopp #koppguitars #acoustic #ibelievethechildrenareourfuture @justaminette
#Repost @acousticmusicworks with @get_repost ・・・ The build out for our woodshop expansion is done! Now we rearrange some machines and start making sawdust again! Lots of great things coming from AMW and Pleinview Guitars! . . . #acoustic #guitar #acousticguitar #guitarstore #guitarrepair #pleinview #pleinviewguitars #pleinviewkrew #luthier #luthiery
So I’m in the #acousticguitar biz in a few different ways, and I have dozens of customers that retreat from buying a guitar at the first sign of a ding. Guys (and gals) take a deep breath and realize that this is part of life. Someone is going to bump into your car with a shopping cart. You are going to scrape your elbow, or bump your noggin, or go after a wily pimple with too much gusto and end up with a scar. You’re going to bang that IKEA box into the wall on the way up the stairs.... point is, this shit is not only everywhere else in your life, but it also indicates that you are LIVING your life! More dings, plz!!!! #jagtime #jagtimemillionaire #acousticguitar #guitarfacts
Back at @scratchfbpgh tonight for the first #jagtimemillionaire appearance of 2020! Like any other ongoing drama that you may be following, you probably have questions about what might happen this season... is the thing still, what was it, #ragtime? Will he play my request? (Your request is “The Entertainer). Is he gonna play “Weeping Willow” and if so, is he gonna play it in the key of G, or maybe go on a crazy spacewalk and play it in A??! To find out the answers to all these questions, come to Scratch tonight at 8! 2 sets, drink specials, FREE! #acousticguitar #scottjoplin #jagtime #fingerpicking #folkguitar #scratchpgh
Oh it’s EXACTLY what it looks like... 7 new #beegees charts to add to all the ones from the original Bee Gentles run because, I don’t know, maybe there’s an appearance coming up this spring... PS Mama’s got a squeezebox #beegentles #beegeestribute #earlyshit #stayingalive @scratchfbpgh
To bring u the rags!! This Thursday night at @scratchfbpgh your friend the #jagtimemillionaire is back with a couple of FREE sets of #folk guitar #ragtimeguitar #fingerpickingguitar and the like! Drink specials! Special music! #ragtime!!!!