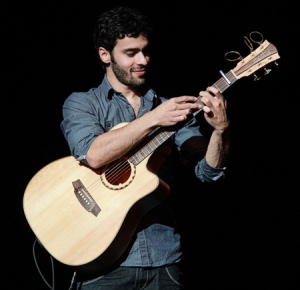 Maneli Jamal is a prodigious young fingerstylist, currently residing in Toronto, Canada. He works in the contemporary, highly physical two-hand style (lots of fretboard tapping with the picking hand) popular with a lot of young players these days, but there are several things that set Jamal apart from the multitudes of Andy McKee hopefuls who play the virtual YouTube circuit.

To say that Jamal’s technique is advanced would be a huge understatement. There aren’t many players in this style that have Jamal’s balance of power and sensitivity, nor his breadth of ideas. His rhythmic concepts can be alternately short and dense, or explored carefully through several movements, as in the four part suite from which The Ziur Movement album takes its name. Jamal has absorbed a number of musical styles, and he is able to seamlessly incorporate jazz, flamenco, classical and Persian ideas into his original compositions. The resulting pieces are very impressive, both technically and musically, and his CD is one of my favorites in the contemporary style.

I recently conducted this email interview with Jamal.

W&W : Let’s talk about the evolution of your fretting hand. You played in punk and metal bands when you were younger… would you say that that’s where you built up your strength and dexterity? Talk about your beginnings in guitar, and some of the early inroads you made toward your current (high) level of technique. Which players put you on the path to your current hybrid style?

When I started to play guitar I had already played violin for a few years learning from my father, a master Persian violinist. That definitely made learning the technical side of the guitar easier at first, especially the coordination between the hands. The great thing about punk and metal playing is that it’s fast and fun as hell to play for anyone starting the guitar.

Because I was self taught I used to be the kind of player that didn’t worry too much about accuracy but rather speed and what sounds cool, which was what punk music to me was all about. Unfortunately, I didn’t teach myself the discipline of accuracy and slow practice until years later. The guitarists of Thrice and Iron Maiden really influenced me in the punk / metal genre. I felt like I had reached a plateau after 3 years of playing that genre in my right hand picking. I thought the guitar pick was the best and most efficient way of playing the guitar… little did I know. I got into the likes of Al Dimeola and that opened up a whole new world for me. END_OF_DOCUMENT_TOKEN_TO_BE_REPLACED