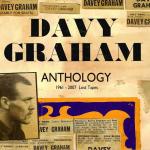 Well, I’ve had myself a very busy year thus far… lots of travelling, playing, recording etc and it has resulted in a shortage of new material here on Work & Worry.  I’ve amassed quite a backlog of very worthy discs for review consideration, and now that I’m determined to get back on that journalistic horse, one release in particular looms larger than most: a triple-disc set of previously unheard recordings from one of the most important fingerstyle guitarists of all time, Davy Graham.  Many consider Graham to be “ground zero” for the guitar-centric British folk and blues revival of the early sixties, and indeed it is hard to imagine that landscape without his influence.  Legendary guitarists like Martin Carthy, Bert Jansch, John Renbourn, Wizz Jones, and a host of others have expressed a debt of gratitude to the man who is widely considered to be the first known practitioner of DADGAD tuning, an innovation that has had a massive affect on not only solo acoustic guitar playing, but also the continuing evolution of traditional Irish and Scottish music… but Graham’s reputation is based on so much more, like his introduction of Baroque-inspired counterpoint on the folk guitar (“Anji” to this day is still considered a total game changer) and his expansive use of musical motifs from every possible source, from traditional British Isles tunes to American folk, blues and jazz, to mysterious modal compositions from the orient and beyond. END_OF_DOCUMENT_TOKEN_TO_BE_REPLACED