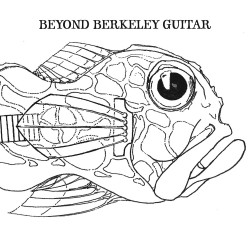 Back in 2006, Tompkins Square, one of the world’s leading acoustic guitar, jazz and archival folk labels, released a compilation called Berkeley Guitar. The LP showcased the playing of three up-and-coming young guitarists : Matt Baldwin, Adam Snider and Sean Smith, who also assembled and produced the collection. The disc made it clear that the American Primitive guitar tradition, first popularized (I know, relative term) by now-legends like John Fahey and Peter Lang in the 60’s, was still alive and well in Berkeley in the new century.

On June 8, 2010, Tompkins Square will release a second installment, aptly titled Beyond Berkeley Guitar. This new collection was once again curated by Smith, and as the name suggests, the parameters have been expanded… Beyond Berkeley Guitar features the work of seven guitarists from the greater Bay area, and the music of these players covers a wider range of sounds, styles, and techniques, both compositional and philosophical.

The players’ geographic proximity results in only a little overlap in their approaches to solo guitar music… from the Robbie Basho-inspired, free-raga meditations of Rich Osborn to the kinetic, bluesy electric runs of Ava Mendoza, from Smith’s multi-movement psychedelic journeys to the more tightly wound, succinct opening statement by Aaron Sheppard… there is a lot of variety on offer, and the twists and turns all add up to make Beyond Berkeley Guitar not only a wonderful snap-shot (polaroid?) of a vibrant guitar scene, but also a great record in its own right.

With the help of Smith and the label, I was fortunate enough to get interviews with everyone who appears on Beyond Berkeley Guitar. For me, these interviews were both exciting and fascinating. The players who appear on this collection are all fantastic guitar players, there’s no doubt about it… but I was delighted (though not surprised) to find that they are all thoughtful, warm and intelligent people, happy to share their thoughts on the instrument, composition, the rich tradition of instrumental guitar music and its welcome resurgence.

The interviews will be posted one per day, starting tomorrow with Aaron Sheppard. There is little or no editing, in most cases. One important note : though I would usually provide a sound sample with any given interview or record review, each player only has one track on Beyond Berkeley Guitar… and I wouldn’t want to give everything away, just like that! I want to strongly encourage fans of finger-picked guitar music to pick up this release, you won’t regret it! Please enjoy the interviews.