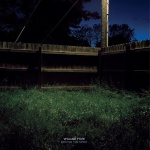 William Tyler has played on his fair share of notable indie albums.  You may have heard him on recordings by Lambchop, The Silver Jews, or as his own solo nom de plum, Paper Hats.  Behold The Spirit is not only Tyler’s first release under his given name, but is also his debut full-length for Tompkins Square, and probably one of the finest acoustic guitar records in that label’s catalog… for even though Tyler does his part to carry the American Primitive flag for the always Takoma-leaning NYC label, the Nashville-based guitarist is no mere copyist… his fresh sounding arrangements and confident, variegated technique prove him to be an intriguing picker in his own right.

I’ll dispense with some minor criticisms early: the “experimental” passages?  This has become something of a cliche at this point, hasn’t it?  It seems that no guitarist under the age of 40 can release an LP that doesn’t contain these sorts of generally indulgent, faceless interludes, and Tyler’s are no more or less interesting than most.  From a strategic perspective, I can see the logic in having a tangible connection to the thriving drone scene, as it can add considerably to one’s audience, and provide crucial performance and touring opportunities (see James Blackshaw’s recent US jaunt with Mountains)… and after all, more than a few of today’s finest young acoustic pickers have evolved out of exactly that scene… it’s just that on an otherwise compelling guitar record like Behold The Spirit, hazy, meandering tracks like “To The Finland Station” and “Signal Mountain” feel like little more than filler.

My other (intermittent) quibble with the record is the insistently ambient, room-mic’d production style, or rather, the fact that it occasionally swallows up the details in Tyler’s accomplished and nuanced playing.   Third track “Oashpe” begins with some very pretty chord changes, and these are definitely enriched by the dreamy sound… but when the guitar playing gains momentum in the pattern-picking section, it gets washed out by the ethereal production, resulting in the track feeling less urgent and less dynamic.  This isn’t always the case, though, and the imposed atmosphere is a nice setting for several of the tunes:  it adds some sonic distinction to a Fahey-esque composition like “Missionary Ridge”, which has Tyler searching, like so many before him, for that perfect front porch melody.  Do echo chambers even have a front porch?  Kidding!

These points aside, there is a whole lot to celebrate on Behold The Spirit, and Tyler’s approach to the acoustic guitar has much more dimension than many of the Takoma revivalists of recent years.  He has the usual dextrous right hand, but tempers it with a healthy variety of picking patterns and tempos.  Tyler doesn’t solely deligate riffs and melody lines to the high strings, but spreads them out all over the fretboard, and his tasteful use of additional instrumentation (horns, steel guitar, field recordings and strings are peppered thoughtfully throughout the record) keeps the listening experience exciting.  Opener “Terrace Of The Leper King” is a long, multi-faceted set piece, and it covers a lot of ground in its 8-plus minutes.  Unlike similarly structured pieces on records by contemporaries Sean Smith and Ben Reynolds, Tyler doesn’t burn up time exploring his tuning, or resorting to typical pattern-picking and Arabesques… rather, he establishes short melodic motifs with a variety of right hand approaches, bridging them skillfully, and subtly fleshes out the arrangement with horns and strings.

“Leper King” also gives us the first occurance of what I would consider Tyler’s trademark, the use of minor turns in otherwise major-leaning chord progressions.  This melodic tendency brings a certain pathos to many of the tracks, an elegance that is more Nick Drake than John Fahey… and though Tyler comes back to it often, it is always used to strong effect.  “The Green Pastures”, with it’s plaintive steel guitar, twinkling piano and strident drumming, plays almost like a Bryter Layter outtake, and is simply a joy to listen to.  My favorite example of Tyler’s melancholic melodicism is the lovely “Ponotoc”, which sets up a simple recurring theme and then presents variations on it, sometimes with unexpected and challenging reharmonizations.

Behold The Spirit is about as creative a record as I’ve heard in 2010, guitar-driven or otherwise.  William Tyler is the real thing, a consummate musician whose tunes and arrangements are often quite stirring, and always entertaining.  Highly recommended.

Buy this LP/CD from Tompkins Square

Jagtime Millionaire gigs are on hold, just like everyone else, so I think I’m going to upload all the official vids to IGTV this week, and maybe I’ll make another in social isolation. Probably a livestream to benefit @rhizome_dc at some point in the next couple weeks, thanks @jonrcamp
When does beer stop being beer? I dunno, 8% earlier than this?! Wish me luck! @eviltwinbrewingnyc #imperialipa #crazyipa
Lockdown imminent due to government order. I’ll miss you, beautiful guitar store!!! @acousticmusicworks #acoustic #guitar #covidfeels #workfromhomehow #acousticmoments
Go to the lesson page at acoustic guitar.com to see darned near an hour of RGD instruction from my man Ernie!
Hey all, get at me I’ll if you’d like to sit 6 feet away from me while I record you doing instrument demos. Got lots of fellas responding (thanks!) but would love some non-dude participants as well. Acoustic, electric, banjo, mandolin. @acousticmusicworks #acoustic #guitardemos #littlegig #gigrelief
Scary times, but we are all very thankful and hopeful to be safe and well. Rosie turned 6 today and received a fascinating self-balancing bird from Grandma! @justaminette @blanchandrews @vacc139