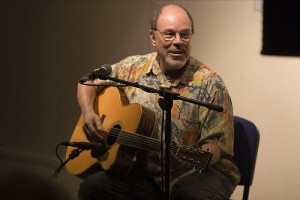 Acoustic renaissance man Stefan Grossman has had a busy year, to say the least. He’s been doing his fair share of globe-trotting, with various concerts and workshops taking place in England, New Zealand, Japan and the US… including a high-profile appearance at Eric Clapton’s Crossroads Blues Festival outside of Chicago this summer. Somehow, Grossman has still managed to keep cranking out new CD and DVD releases via his Guitar Workshop, from blues and ragtime guitar instruction, to the latest installments in the Guitar Artistry DVD series, to a group of indispensable CD reissues of classic Kicking Mule albums.  This new release schedule hasn’t been easy to stay on top of, but with such a wealth of acoustic guitar music to dig into, this writer certainly isn’t complaining! As always, the blues factors significantly into the Guitar Workshop mission, and this year saw the release of many blues-oriented DVD titles.  On the instructional side, Grossman himself teaches on the titles Fingerpicking Country Blues Gospel Guitar and Bottleneck Blues Guitar. On the Atlanta Blues Guitar and Jackson Blues Guitar DVDs, John Miller teaches the approaches of players working in these less celebrated (but so important… Blind Willie McTell, anyone?) hotbeds of blues activity.

Ari Eisinger, a preternaturally gifted blues and ragtime guitarist, had a hand in three DVD titles this year : as an instructor, Eisinger presents The Guitar Of Lonnie Johnson and The Ragtime & Blues Guitar Of Blind Blake, giving deep analysis into the playing styles of two of the most creative and technically gifted guitarists that the blues ever produced.  A person could spend an entire lifetime trying to take command of any one of these tunes, but Eisinger knows the styles inside and out, from Johnson’s jazzy runs to Blake’s famous signature “double thumb” technique.  If you’re a blues guitarist looking for a real challenge, look no further!  My fingers unfortunately don’t seem to be designed for this advanced level of playing, but that’s okay…  I’m more than happy to put on The Guitar Artistry Of Ari Eisinger, sit back, and marvel at the man’s many talents.  With segments filmed in 2001 and 2009, Eisinger discusses and picks through an awe-inspiring repertoire of tunes by Johnson, Blake, Blind Lemon Jefferson, Memphis Minnie, and more.  Eisinger’s technical mastery of these selections never overshadows his feel for the blues, and it’s hard to imagine a more joyous, authentic sounding presentation of this wonderful music. Another DVD that came down the pipeline this summer was The Guitar Artistry Of Woody Mann – Songs From The Blues. Though Mann is also a student of classic country blues, his approach couldn’t be more different from Eisinger’s…  the feel is more contemporary, and instead of recreating the blues as it sounded on the old 78’s, Mann stretches the song structures, mixes and matches riffs from different players and eras, and injects a good bit of smooth jazz playing into the mix.  Though I admire Mann’s technique and enjoyed his stories, I found the presentation of the music on this DVD just a little too smooth, considering the source material… the sound was a little too “electrified-acoustic”, the picking just a little too easy-going.  It did, however, inspire me to hunt down some of Mann’s spirited performances on YouTube, and there’s no doubt about it, this guy can play the blues with the best of them!

Some of the most intriguing releases from Stefan Grossman’s label this year have been by the man himself.  This site already ran an extensive review of the excellent In Concert album, on which Grossman shares double-billing with his longtime friend and collaborator John Renbourn.  Two of Grossman’s very early solo albums, Aunt Molly’s Murray Farm and The Gramercy Park Sheik, were issued this year on a single CD, with updated liner notes and TAB transcriptions included.  …Murray Farm finds the fresh-faced young guitarist playing a variety of traditional country blues songs (“See See Rider”, “Delia”), an ambitious arrangement of the famous “Dallas Rag”, and the very uptight sounding “Sideways Nowhere Bound”, a dated pop-blues that finds Grossman sounding less than invested in its lyrics’ psuedo-psychadelic imagery.  Regardless of the style of song, Stefan sounds confident and energetic on his pawn shop Stella, and his able guitar playing more than makes up for the less than ideal guitar tone and slightly uneven (but probably required, in some measure, on a 60’s Fontana folk album) vocal performances.  Overall, …Murray Farm is the sound of a talented blues guitarist still finding his voice. The Gramercy Park Sheik, though,represents a giant leap forward for Grossman.  The singing is spirited, the mood much more playful, and the guitar sound very much improved, Grossman having swapped the Stella out for a 1930 Martin OM45.  Some of the tracks continue in the vein of the previous album: the country blues theme persists with “Little Rock Blues No. 2” and “Mississippi Blues No. 2”, while “Crow Black Squall”, later featured in a full-on blues-rock arrangement on the Grossman/Kalb collaborative album Crosscurrents, is pretty much this record’s “Sideways Nowhere Bound”…  but Grossman’s compositional talents, especially on his instrumentals, really begin to take shape on Sheik.  A distinct Anglo-European influence can be heard for the first time on the wonderful “Lena Anne” and “Gentle Joys, Gentle Sorrows”, and this new direction finds it’s apex in “Requiem For Patrick Kilroy”, a song that I consider to be a very important composition for these, Grossman’s formative years.  The piece begins as a sort of blues-tinged Irish air, but it isn’t long before the tempo increases, and Grossman is picking atmospheric (yet snappy) figures against a low drone.  After a hard-strumming section, there is a slow, dirge-y blues coda.  “…Kilroy”, with it’s unique and creative melding of influences, was an indicator of what was to come for Grossman, and could very well be considered the first significant composition of his “European period”.

Also reissued this year was Grossman’s Shining Shadows, an album of original guitar instrumentals that he recorded live to 2-track at the BBC, back in 1984.  I’ve owned this album on vinyl for a few years, and for whatever reason, was never able to fully delve into it the way I had on say, Guitar Landscapes or Grossman’s incredible duet albums with Renbourn.  Re-listening for this review, though, I was struck by just how strong and originalthe album is… for one, Grossman re-recorded “Requiem For Patrick Kilroy” for these sessions, and the song shines just as brightly here as it did on The Gramercy Park Sheik. Some of the songs on Shining Shadows are slow-burners, but most are very beautiful, Grossman exhibiting no small amount of musical maturity on tracks like “Logan’s Water” and the closer “Lament For A Goodman”… and even though the mood of Shadows can be sentimental,  “Lemon’s Jump” features some head-turning blues runs, assuaging any fears of a Grossman gone soft! 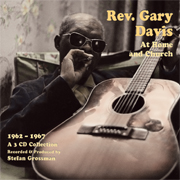 The final release that I’d like to talk about in part 1 of this story (there has been a veritable flood of Kicking Mule-era ragtime guitar reissues, and those will be covered in part 2) is a very special one indeed: Rev. Gary Davis – At Home and Church is a wonderful 3-disc collection of amatuer recordings that Grossman made of his guitar teacher and mentor, dating from 1962 to 1967.  Rev. Davis, in addition to starting Grossman on the path to acoustic guitar hero status, was one of the greatest and most beloved country blues pickers to ever work in the idiom.  These intimate recordings feature many sides of the blind preacher’s playing, from rags and religious songs to claw-hammer banjo and accompanying singers from his church… not to mention three distinct readings of Davis’ signature “Candyman”!  Disc 3 features the reverend performing a religious service at his storefront church in the Bronx, and is equal parts music and sermonizing.  The package also features some photography and touching liner notes from Grossman, whose respect and admiration for Davis has only gotten stronger over the years. As stated, in part 2 I’ll be talking about many of the incredible ragtime reissues that SGGW has put out this year.  Stay tuned!